At The Table Live Lecture Andi Gladwin October 5th 2016 video DOWNLOAD
We are incredibly excited to announce that Andi Gladwin is back for his second At The Table Lecture! The only British magician to perform at President Obama's inauguration, Andi is a world-class sleight-of-hand artist whose routines are filled with wit, charisma, and a ton of magic. If you're a hobbyist looking to make a career in magic, or if you are a seasoned pro looking to book more gigs, Andi gives invaluable insight on how to market yourself, build a website, and organize a business around performing magic. But more importantly, Andi delivers with his style of hard-hitting magic -- his walk-around routine alone has twelve moments of magic built into it. Join us At The Table, as we welcome once again the one and only, Andi Gladwin. Here's what you'll learn:

Fireworks Card Routine: Andi's killer walk-around routine. He's designed this worker with a series of twelve quick-fire magical moments that fully engages three or more spectators. While this is performed without a memorized deck, the best-kept secret of this trick is that it can be performed without destroying a stack, making it a natural opener for mem-deck work.

Pickpocket Biddless: Inspired by Guastaferro's "Biddless," Andi "pickpockets" the spectator's chosen card from within the spectator's grip, revealing it to be in his own pocket. And this effect is made even better with a powerful surprise ending.

Monte Python: A "Flat-Monte" routine perfect for walk-around. No gaffs or gimmicks in this version, and it always leaves spectators scratching their heads. 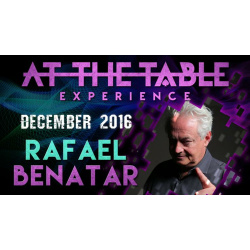 Pieces at 3am Volume One by Dee Christopher eBook DOWNLOAD