Be Sure To Check Out The Demo Video.

"Mobile Magic" is a Unique Collection of 120 Specially Designed Animated Gif Images for use on your Mobile Phone or indeed any other Android or IOS device such as Tablets and even Computers.

You are also supplied with 2 non gimmicked Spinning Hypnotic Spiral Gifs along with a comprehensive Illustrated 60 Page Large format (A4) PDF Ebook Instruction Manual and also copies of all the 120 Artwork Images used in the gaffed disks to complete this Tool Kit of Wonder.

Although ideas, suggestions and applications are included from Jonathan Royle & Stuart Cassels the creators of this package, along with others from Kenton Knepper, Ken Dyne, Colin Cloud, Lior Manor, Marc Paul and Lee Earle, the real value of and uses of this package are truly only limited by your own imagination.

Yes you can add an amazing new dimension to many Close-Up Magical Routines and indeed also perform new and original ideas.

Yes you will be able to perform miraculous feats of Mind Reading and Mentalism.

Act or Show of Comedy Stage Hypnosis without any real Hypnosis ever being needed and in a manner where those taking part will also end up truly believeing that they have been in a genuine Trance State.

And yes you can devise your own Unique routines and ideas using this comprehensive Tool Kit that you will truly enjoy playing and performing with.

"I wish you would have caught up with me before - I had been working on this and then put the easy way into "Ultimately Under" We could have both saved ourselves some time and money. Anyway I have scrapped ours as I have plenty of other projects for Wonder Wizards to do!"
KENTON KNEPPER

We also discovered through email communications with Kenton that he has used almost identical ideas to "Mobile Magic" for many of his high end personal consultancy clients including such as for Televisions Keith Barry, my point being if this sort of methodology is good enough for Kenton and his clients & students then its certainly good enough for both you and us to give full and proper consideration to.

When we emailed a proto-type of just one of the gimmicks to veteran Mentalist Lee Earle for his opinion his response was quite simply: "I looked over your materials - brilliant! I wish I had thought of using the Hypno-Disc first. You have a winner on your hands. Good luck with it."
Lee Earle

And when we sent one to Lior Manor he rapidly responded with the comment:

"thanks a lot. this is cool. I hope I can contribute something"
Lior Manor

Yes it is true, a few months at most after we released this it was useless as Mobile Phone Technology changed and this no longer worked on 95% of phones and so it flopped at that point as it became useless to anybody...

THE PHOENIX HAS RISEN FROM THE ASHES...

We are now proud to announce the official 2015 "Mobile Magic" on Steroids Relaunch...

TAKE ANOTHER LOOK ABOVE AT WHAT KENTON KNEPPER, LEE EARLE & LIOR MANOR THINK ABOUT THIS AMAZING UTILITY DEVICE...

The Video really does explain exactly what you will receive in your Zip File Download Package so if you have not watched it yet be sure to do so now and you will soon realise how useful and powerful this package will prove to be to you in terms of creating True Miracles.

Various suggestions for Close-Up Magical Uses as well as full blown Stage Mentalism Routines are included as examples in the instructions along with a Bonus Long Distance Mobile Phone Telepathy Routine where an audience member calls a friend on their own phone and that friend is able to correctly read the minds of 3 audience members in a most amazing manner.

At only $30 for the complete package it means that each "Gimmick" is only costing you 25 Cents each and that you are effectively getting the non gimmicked disks, copies of Artwork and 60 page Ebook at no cost. 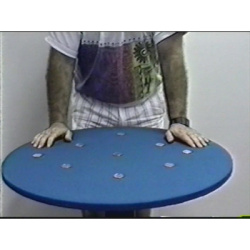